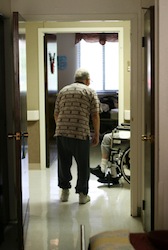 According to the National Center on Elder Abuse (NCEA), directed by the U.S. Administration on Aging, elder abuse is defined as the “knowing, intentional, or negligent act by a caregiver or any other person that causes harm or a serious risk of harm to a vulnerable adult.” Injuries suffered by the elderly in nursing homes can be physical, emotional, or sexual, or can result from abandonment, neglect, or exploitation. Each year in the U.S., it is estimated that more than two million senior citizens are subject to abuse.

It is hard enough making the decision to place a relative in a nursing home or assisted living facility, but sometimes there are literally no alternatives due to financial considerations and other factors. However, it is simply unacceptable to permit a loved one to undergo conditions which are dangerous, humiliating, disrespectful and potentially financially devastating to the family member. It is estimated that approximately 40% of U.S. citizens over the age of 65 will end up living in an assisted living facility or nursing home, and the 35 million Americans presently over the age of 65 will inevitably increase in number to the improvements in treatments for cancer and other potentially fatal diseases such as AIDS.

The warning signs of elder abuse include the following:

The NCEA also notes that between one and two million Americans aged 65 and older have been injured, exploited or otherwise mistreated by someone they depended upon for care and protection. When relatives are placed in a nursing care facility, there is an expectation that they will be provided proper care in a clean and professional environment. However, the U.S. Department of Health and Human Services reported in 2008 that 91 % of nursing homes surveyed were cited for deficiencies and departures from good and accepted nursing care.

If your loved one has suffered from nursing home neglect, the experienced lawyers at the Law Office Of Mark A. Siesel are here to help. We have well over a quarter century of experience and provide personal and devoted attention to your case. We are litigators who will analyze your case thoroughly, fight the insurance companies and their counsel from our retention through the resolution of the case to protect our clients’ rights at all times, and seek full compensation for all of the physical, emotional, psychological and financial injuries suffered by our clients. Call our office at 1-(914) 428-7386 or contact us online for a free consultation and evaluation of your case.

Client Reviews
★★★★★
Mark's professionalism and integrity were exemplary from the beginning to the end. I implicitly trust him. Through mediation or litigation, Mark is resourceful in getting you the best results. L.A., former client
★★★★★
Mark handled all aspects of my case thoroughly and aggressively, from fighting with the insurance companies regarding my medical expenses to litigating the case against the City of New York. My phone calls were always returned the same day. J.D., former client
★★★★★
There is no one better than Mark Siesel. He is honest, fair, caring and gets the job done. P.A., former client
★★★★★
When I had a motor vehicle accident and needed a lawyer, I went to Mark. From the initial visit I had with him, through the end of the case, I felt comfortable, confident, fully informed, and trusting because of the way he treated me. S.G., former client
★★★★★
...thanks for the fine job of Mark Siesel on my settlement... everything was handled expeditiously and with intelligence...I was in good hands with Mr. Siesel. B.B., former client
★★★★★
We feel very lucky to have Mark be the one that represented us. In a low key way, he guided us through confusing hospital red tape, answered questions and was quickly and consistently available for all our concerns. NM
View More
Submit a Law Firm Client Review