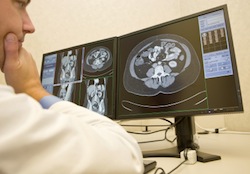 Traumatic Brain Injuries (TBI) can occur in automobile accidents, trip and fall accidents, or even when performing activities of daily living or playing a variety of sports. These injuries can have a devastating effect on its victims and dramatically alter their lives. Additionally, there have been numerous reports recently of football and hockey players who suffered numerous concussions during their playing careers who are now being diagnosed with dementia, depression and in several cases becoming suicidal due to repeated trauma to the brain.

The Centers for Disease Control and Prevention (CDC) reports that on an annual basis approximately 1.7 million people are in accidents which cause a traumatic brain injury. About 52,000 of these people die from their injuries, approximately 1.35 million are treated in emergency rooms and discharged, and 275,000 are required to undergo extensive hospitalization to treat their injuries.

The CDC indicates that TBI is caused by many types of trauma, but the most common reason is from trip and fall accidents, with 1/3 attributed to this cause. The next most common is automobile accidents, which is the cause in roughly 17% of cases. Despite this fact, twice as many people die from brain injury suffered in an auto accident than in fall down accidents. Another significant cause of TBI is from being struck in the head with an object, or striking one’s head against an object or hard surface.

The most common injury from a traumatic brain injury is a concussion. Concussions are not always serious, but can result in a litany of symptoms, including double vision, blurred vision, loss of consciousness, nausea, headaches, ringing in the ears, loss of memory, and difficulty problem solving, among others.

More severe brain injuries can cause:

Brain injuries are classified from a light concussion, to the much more serious destruction of brain tissue found in lacerations or hemorrhage, to the most severe in a depressed skull fracture or compound skull fracture, most frequently from blunt force trauma.

There are many misconceptions and myths about TBI. For example, that TBI is not disabling; that mild TBI is not permanent; that the effects of TBI are noticeable immediately; that negative MRI’s, CAT Scan’s or EEG’s (electroencephalogram) preclude the possibility of TBI; that there must be a head injury to suffer traumatic brain injury, and that there is always a loss of consciousness in a TBI case. The first myth, as to mild TBI not being disabling, has been refuted by the National Institutes of Health (NIH). The NIH reports that TBI causes a significant disruption in the victim’s family life, substantial medical/hospital expenses, and a dramatic effect on his or her ability to earn a living and earning potential. TBI can lead to substance abuse, suicidal ideation (thoughts of suicide), and chronic unemployment.

A much more accurate test to determine TBI, as opposed to MRI’s, CAT Scan’s or EEG’s, is neuropsychological testing, which consists of a series of tests designed to measure brain function across a wide range of cognitive and emotional abilities. These examinations can find subtle deficits or changes in mood, behavior and functioning , which are not within the scope of MRI’s, CAT Scan’s or EEG’s.

Mild TBI is not easily recovered from, and in many cases, symptoms linger for a substantial period of time, including headaches, vision problems, dizziness, memory problems and neck pain. These long term problems are part of a group of symptoms generally known as post concussion (or post concussive) syndrome.

Severe brain injuries can result in long term disability, paralysis and death. If the severe brain injuries are caused through the negligence of another person, and result in death, that person can be sued for wrongful death. We have also represented clients who suffered brain injuries due to a drunk driver, or in a construction accident due to the negligence of property owners, general contractors and construction managers. The Westchester County Brain Injury Lawyers at The Law Office of Mark A. Siesel have the experience, dedication, and determination to fight the insurance companies and their attorneys to obtain the maximum compensation for our clients’ physical, financial, emotional, and medical injuries and damages. Contact us online or at (914) 428-7386 for your free consultation today.

Client Reviews
★★★★★
Mark's professionalism and integrity were exemplary from the beginning to the end. I implicitly trust him. Through mediation or litigation, Mark is resourceful in getting you the best results. L.A., former client
★★★★★
Mark handled all aspects of my case thoroughly and aggressively, from fighting with the insurance companies regarding my medical expenses to litigating the case against the City of New York. My phone calls were always returned the same day. J.D., former client
★★★★★
There is no one better than Mark Siesel. He is honest, fair, caring and gets the job done. P.A., former client
★★★★★
When I had a motor vehicle accident and needed a lawyer, I went to Mark. From the initial visit I had with him, through the end of the case, I felt comfortable, confident, fully informed, and trusting because of the way he treated me. S.G., former client
★★★★★
...thanks for the fine job of Mark Siesel on my settlement... everything was handled expeditiously and with intelligence...I was in good hands with Mr. Siesel. B.B., former client
★★★★★
We feel very lucky to have Mark be the one that represented us. In a low key way, he guided us through confusing hospital red tape, answered questions and was quickly and consistently available for all our concerns. NM
View More
Submit a Law Firm Client Review